It’s easy to understand why people oppose trophy hunting. The idea that someone kills an animal to hang its head on a wall seems cruel to that particular animal. Looking at it from a micro level, that would appear to be true for the individual animal. But that simplistic view fails to recognise the vital role trophy hunting plays in wildlife conservation at a macro level.

In many countries around the world, properly managed and regulated trophy hunting is not sending wildlife into extinction. It is actually saving threatened species and increasing their numbers – the very opposite to what most anti-hunters would have you believe.

How the markhor became endangered

The markhor is a species of mountain goat found in several countries throughout Central Asia including Afghanistan, India, Pakistan, Tajiskistan, Turkmenistan and Uzbekistan.

Not that long ago, markhor were listed as critically endangered by the International Union for the Conservation of Nature (IUCN).

While unregulated trophy hunting was part of the problem, the main cause of their demise was how the locals viewed them: they saw the markhor as a pest, and as such did nothing to manage or preserve their numbers. Instead, the markhor were often killed to protect crops or as a cheap and plentiful source of meat.

Trophy hunting is a vital tool in wildlife conservation

The only way to elevate an animal from pest species to protected species is to ascribe value to that animal.

If the locals began to view the markhor as an important source of income, they would protect that income source.

Conservation groups met with the locals in Pakistan and helped them develop a controversial plan that they believed would save the markhor from extinction. Each year, the locals would release a limited number of trophy hunting tags for the markhor to be auctioned off to trophy hunters, with all the money raised from those tags going back to the local community, and to protecting the rest of the herd.

Ironic that the common rhetoric of animal rights activists and anti-hunters is that trophy hunting hurts wildlife and must be banned, but the IUCN and other conservation groups were advising the opposite – that  the best way to conserve the markhor was to make it valuable and let trophy hunters pay big dollars to hunt it.

The local communities started out charging $30,000USD for a tag, with only 12 tags released per year. This gave a poor, local village the opportunity to derive approximately $360,000USD a year in income from an animal they had previously considered a pest.

Under the scheme, only older males would be hunted, a concept that is backed up by scientific research. You see, animals prized by trophy hunters are at the end of their life span, have contributed all they are going to contribute to the gene pool, and are actually limiting opportunities for younger males to refresh the gene pool (in other words, the herds end up becoming quite incestuous and interbred – actually harming herd health).

Despite the Disney images of the animal kingdom, these older males do not live out their golden years in peace, dying peacefully under a tree surrounded by a loving herd.

Death in nature is often far more brutal. They either die of starvation because their teeth are so badly worn down they can no longer feed properly, they become easy game for predators, or they are challenged, defeated and killed by the younger males.

None of these are the quick, painless deaths animal rights activists would have you believe.

It is ironic that animal rights activists and anti-hunters are generally the same people who believe the human population has gotten too large and needs to be thinned or culled.

Yet they lack the ability to think the same way about the animal kingdom.

In just a few short years, trophy hunting in places like the Qila Saifullah National Park has successfully brought the critically endangered markhor back from the brink of extinction.

In 1993, there were only around 275 markhor left in Pakistan. The IUCN Red List of Threatened Species now estimates markhor numbers had grown to around 5,754 – an increase of 1992%.

These days, trophy hunting a markhor has become even more expensive, with trophy hunters now paying up to $110,000 USD for a tag. The Western media tend to focus on the individual, making it seem immoral to pay that much money to kill one animal. What they fail to see is the complete opposite. Trophy hunters are some of the only people in the world willing to pay that kind of money to save a species from extinction. Trophy hunters have also helped an animal that was once seen as a local pest now a major contributor to the economy, injecting around $1.32 million into rural and remote areas with very few ways of making an income.

Trophy hunting has become a dirty word, with even some hunters joining in the demonisation of trophy hunters. But is trophy hunting evil? Or does it play a vital role in wildlife conservation? 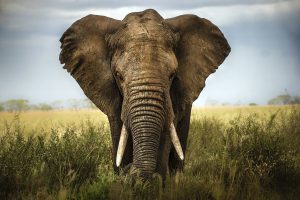 In this article, find out how 55 elephants were killed with kindness in Hwange National Park in Zimbabwe, and how their deaths could have been avoided.

Join I Am Hunter today and help ensure hunting survives

9 thoughts on “How trophy hunting is saving the markhor”